Rawlings to be laid-in-state from January 24

The State has scheduled the funeral rites of the late former president, Jerry John Rawlings to begin from Sunday, January 24 to Wednesday, January 27, 2021.

The State has scheduled the funeral rites of the late former president, Jerry John Rawlings to begin from Sunday, January 24 to Wednesday, January 27, 2021.

The new dates come after the postponement of the funeral rites for the former Ghanaian leader originally set for Wednesday, December 23, 2020.

A correspondence issued to all Diplomatic missions and Consulates by the Ministry of Foreign Affairs and Regional Integration sighted by Kasapafmonline.com announced that the Laying-In-State of the remains of the ex-military leader will begin January, 24 to January, 26,2021 from 9:00 am to 5:00 pm daily at the Foyer of the Accra International Conference Center.

Subsequently, there will be a requiem mass slated for the morning of Tuesday, January 26, 2021, at Holy Spirit Cathedral at 9:00 am.

Meanwhile, the burial service is to be held on January 27, 2021, at the Independence Square, Accra.

Former President Jerry John Rawlings died at the age of 73 at the Korle Bu Teaching Hospital (KBTH) in Accra on November 12, 2020.

Below is the Press Statement 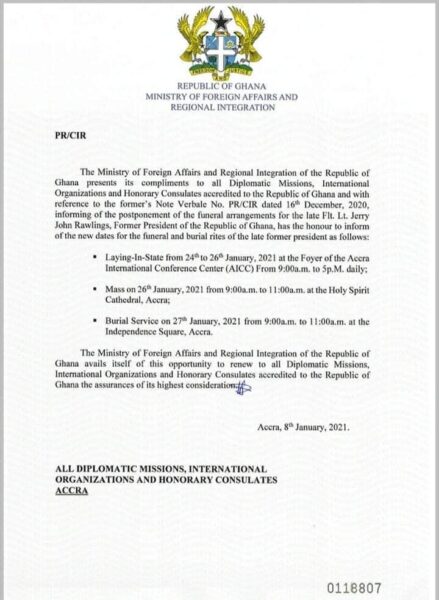 Teachers and Students risk of contracting COVID-19 as schools...

Thank you for picking our daughter– Komenda queen mothers...

We can’t be fooled; NDC’s Covid-19 team was political exercise...

All fifty-five (55) staff of Asamankese Government Hospital and a CHPs compound...

Ghana returns to investors to raise funds via 3-year bond

Ghana returns to investors to raise funds via 3-year bond

The President of the Republic, Nana Addo Dankwa Akufo-Addo, has admonished all media...

The Electoral Commission has rejected claims that its leadership failed to receive...

The Electoral Commission (EC) has maintained its commitment to announce the Presidential...

Ghana’s Speaker of Parliament, Prof Aaron Michael Oquaye, has taken his turn to...

I was deeply touched when Sir John spent 3 days in my house...

A member of the Constitutional, Legal and Parliamentary Affairs Committee of Parliament...